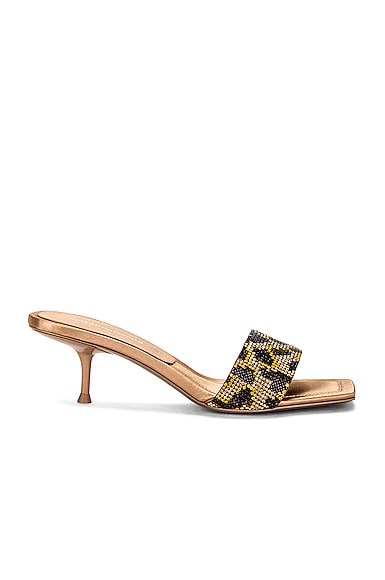 Alexander Wang Jessie Leopard Crystal Sandal in Animal Print,Neutral Crystal embellished satin upper with leather sole. Made in China. Approx 50mm/ 2 inch lacquer heel. Satin fabric insole. AWAN-WZ311. 30C220S033. About the designer: New York-based designer Alexander Wang offers statement-making womenswear that blends classic, refined silhouettes with an urban sensibility. His clothes are at all times luxurious, but also inspiring, provocative, and wearable. Born and raised in San Francisco, Wang moved to New York at the age of 18 to attend the Parsons School of Design. By his sophomore year, Wang was already developing the first collection of his eponymous label, which officially launched in 2007. In 2008, at the age of 24, he won the CFDA/Vogue Fashion Fund and was nominated for the 2008 CFDA Swarovski Womenswear Designer of the Year award.